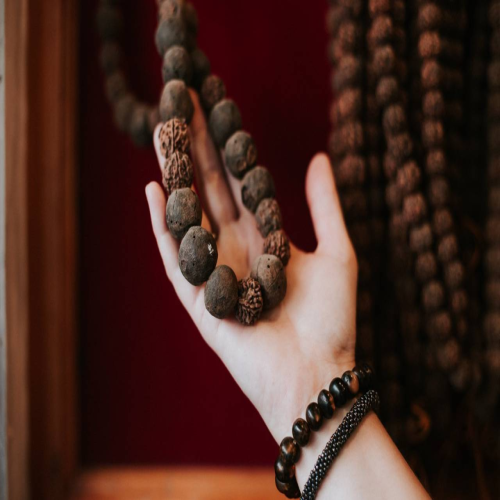 Following check-list may be reviewed before starting the wearing procedure:

1. Ensure that the mala or combination has the correct number of beads. Check that the beads are not used earlier by anyone and are without any damage.

2. Ensure that the mala is made with beads having the correct directions (face to face and tail to tail).

3. Remember that it has to be taken off the body while drinking alcohol, eating non-vegetarian food, while having physical intimacy with women, and going to a funeral (additionally for females during a menstrual period). Do not feel guilty if this is not followed unintentionally. In that case, just re-purify the beads by washing them in pure water and chanting Om Namah Shivaya five times.

4. Ensure that you have paid fully for the beads or mala to the seller. It is observed that unless the commercial deals are completed in full, (except in cases where it is received as a gift), rudraksha does not offer its full effects and gives negative feelings. This leads to suspicions about its worth. Stolen rudraksha should not be used at all.

5. Rudraksha is not confined to any specific religion. It is for the entire mankind. The rituals are incidental and are to be followed willingly and with respect.

6. Rudraksha does not cause any side effects hence undue suspicion about its effects may be misplaced. Do not over-expect changes or magical effects to happen. Its wearing is also not a short-term activity. It has to be worn for the entire life span.

7. Always use new rudraksha and never use rudraksha worn by someone else. If you have received these as legacy or legitimately from near and dear ones, then first perform the purification ritual or Abhishek and then wear them. Old rudraksha should be specially checked for any damage or holes or cracks and if found these should not be used.

It has been emphasized in all the epics which have highlighted the merits of rudraksha that at the time of wearing rudraksha and even while regularly wearing it, it should be worshipped as per prescribed procedures and particularly by chanting the recommended mantras. Shrimad Devibhagawat says that rudraksha should be worn without any expectations and with total devotion and happiness. In doing so, one tends to obtain the knowledge of Shiva. It says that the power of rudraksha is such that even if worn without reciting the mantras, it will be beneficial. However, for brahmins (including those who have converted themselves to Brahminism by taking second birth, or twice-born called Dwij, by sticking to a strict disciplined lifestyle) it is necessary to use mantras. Shiva Puran, while giving the beej mantras, says that blessed are those who wear rudraksha chanting these mantras. Even listening to these mantras gives good results.

Rudraksha needs to be blessed, purified, and energized before they are worn. This is done by performing Rudrabhishek and chanting of pranpratishtha mantras and seed mantras.

Seed mantras for all mukhis are given below once again for easy reference (as per Shiva Puran):

For other beads, please refer to Chapter 2. It has been mentioned that the common mantra for all rudrakshas irrespective of their mukhi or type is Om Namah Shivaya or mahamrityunjaya mantra given in the following pages.

Pooja or blessings of rudraksha

Choose an auspicious day or any Monday for blessings

Follow this simple ritual prior to wearing a rudraksha:

1. Wash or sprinkle rudraksha/mala with Ganges water or pure water

5. Touch the rudraksha on a Shivaling or Lord Shiva’s photo and chant Om Namah Shivaya for a minimum of 11 times. Thereafter, the rudraksha can be worn or put at pooja place.

For an elaborate rudraksha pooja or blessing, the following procedure may be adopted. Blessing may be done by the wearer, his guru or a priest:

Panchgavya, a mix of cow’s dung, urine, milk, ghee and curd. In its absence, use panchamrit which is mix of unboiled milk, honey, sugar, ghee and curd.

Ganges water in an achamani pot with kusha grass for sprinkling. Use spoon if kusha grass is not available and in the absence of Ganges water, use clean pure water.

After taking bath and with a calm and composed mind and a clear body, sit on an asan (mat or clean carpet) facing the east.

Wash the rudraksha with punchagavya or panchamrit Then wash it with water/Ganges water.

Place the rudraksha along with nine leaves of peepal tree. Place an empty plate in front to make offerings.

Chant the mantra Om Namah shivaya three times Sprinkle water over yourself and all the items of pooja Chant:

Take water or right hand and pour on ground. Chant:

Take a flower and dip in sandal paste and aromatic oils and touch on the beads.

Again, take a flower and dip in sandal paste and touch on beads.

Chant these next mantras and give the offerings or give rice to the plate in front of rudraksha: (offering to the lotus feet of Shiva Maha Devaya, I bow )

Burn camphor and circle it clockwise three times in front of the plate and chant:

Repeat and after each mantra each touch right eye, left eye and forehead

Chant Mahamrityunjaya mantra five times and offer rice to the plate in front of the rudraksha after each round:

Bow or supplicate, then chant this last prayer:

Although several different procedures and worshipping details are followed in terms of various epics, the above-referred common pooja vidhi is complete. However, many would like to wear rudraksha using detailed worshipping for each mukhi. We are giving below the ritualistic Vedic procedure as given in Shiva Rahasya. (Ref. 5)

“O Lord Mahadev! Please remove my doubts and explain how rudraksha got produced and how to wear it? I have heard that in this planet and other lokas, rudraksha wearing is considered very auspicious.”

“Once upon a time, a demon king, Tripurasur, became so powerful that he defeated Brahma, Vishnu, Indra, Takshak and other Devas and thereupon all the Devas approached me with prayers to protect them. To liberate them from tyranny of this demon, I equipped myself with a weapon named as Kalagni, which was astoundingly bright, fierce and divine Aghorastra. I closed my three eyes for one thousand divine years and meditated. Thereafter, due to fatigue and sadness (because of the destruction done by the demon), some tears fell from my eyes. Wherever these tears fell on this Earth, where there are the birth and death cycles (mrityulok), rudraksha trees grew. From that time, rudraksha became famous in all the three lokas (earth, sky and patal). By touching rudraksha, one gets benefits one lakh times, by wearing one hundred lakh times and by using a mala and offering jap tens of lakh times.

“A person who wears rudraksha on his hand, ears, forehead and throat will be able to move on this Earth without fear.

“A person wearing rudraksha is like Shiva and is worshipped by devas and demons alike. A person full of sins, impurity and repulsive habits also becomes free from sins by just touching rudraksha.

“Even an animal like a donkey, if dies after wearing rudraksha becomes rudraswaroop, what to say for human beings.”

“Lord Shiva! Please tell me the properties of one to fourteen mukhi rudraksha.”

“One mukhi is Shiva swaroop (Like Shiva) and purifies one of sins like brahminicide. Two mukhi is God of Gods (Mahadev) and purifies one from the sins of cow slaughter. Three mukhi is blessed by fire and purifies one from the sin of killing a woman. Four mukhi is Brahma and it purifies the wearer from the sin of committing manslaughter. Five mukhi is like Rudra Himself and purifies from the sins of adultery and consuming prohibited items like alcohol, meat etc. Six mukhi is Kartik himself and the one who wears it on the right arm purifies himself from sins like that of getting abortion done. Seven mukhi is Anant (Kamdev) and the wearer of this gets freedom from the sin of committing theft of gold and also of cow slaughter. Eight mukhi is Ganesh Himself and the wearer gets freed from physical relations with women other than one’s own wife. Nine mukhi is Bhairava and should be worn on left hand. It cleanses one from the sins of several million kinds. Ten mukhi is Lord Vishnu (Janardan) and removes fear of planets, ghosts, evil spirits and snakes. Eleven mukhi is Ekadash Rudra (Hanuman). One who wears it on the tuft (Choti/Shikha) gets the benefit of conducting thousands of Ashwamedha Yajnas and hundred Vajpeya Yajnas and donation at the time of lunar eclipse. Twelve mukhi is like Sun. One who wears it around the neck gets freed from sins of cow slaughter, manslaughter and gold theft. He will not be afraid of thieves, fire, elephant, horse, deer, ox, pig, Lion, jackal, etc. Thirteen mukhi is Indra. The wearer fulfils all the desires and gets blessed by good fortune and wealth. They get gold, diamond, silver and mercury and get freed from all kinds of sins. Fourteen mukhi is blessed by Hanuman and those who wear it on the forehead continuously get eternal bliss and Nirvan.”

Skand expressed his desire to learn mantras of different mukhis to which Lord Shiva replied as under:

“Wearing of rudraksha is very auspicious and the wearer reaches rudralok (Kailash) after his death.

“Any person wearing rudraksha without mantras shall be punished with a life in hell.

“The worshipping details are: (Note: The mantras detailed are different from those given along with the bead description in Chapter 2. Even in some cases, the Gods to which the rudraksha is assigned are different. This diversity is typical of our culture, but all the mantras given here are Siddha mantras and the method is fully Vedic and hence can be followed. If any one wants to use those mantras mentioned earlier, it can be done without any confusion.)

Take water in hand and chant the following after which throw the water on the floor.

These mantras are for your whole body.

These mantras are for the five fingers and the palm.

This prayer is offered during meditation of the particular God, who has blessed the rudraksha. Concentrate on Him/ Her and say these prayers.

Afterwards, place a copper pot over a vessel full of water. Keep the rudraksha on the empty pot and take the water pot in left hand and pour water over rudraksha. Keep chanting Om Namah Shivaya.

Take out the rudraksha and then wear it.

(Please follow the different karmas as mentioned in one mukhi)