One mukhi rudraksha from Nepal: 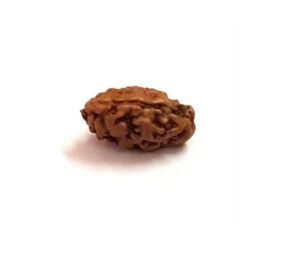 For all practical purposes, the one mukhi round variety rudraksha from Nepal is a rare bead. Almost all traders who have been in this business for several decades, are not confident of seeing a round variety of one mukhi rudraksha. Though, it finds mention in all the old texts, it has remained an enigma. Even the old collections from ashrams and sadhus or princely families do not seem to have such a rudraksha. If we go by the old shastras, then one mukhi Nepal variety remains as one of the biggest mysteries of our times.

There are several assumptions, myths and stories relating to the Nepal one mukhi rudraksha, some of which are:

That only one tree bears this seed once in five or ten years (some say even each year). out of three seeds are created every year in one specific tree, one seed vanishes inside earth after falling, another goes to the King of Nepal, while the third is distributed randomly by hiding it inside prasad (of round ladoo sweets) on Mahashivaratri day, when lakhs of people assemble at the temple premises and the luckiest one gets it. (As there is no king now in Nepal, the saying is not relevant)  trading of one mukhi rudraksha is banned in Nepal and any one found selling it can be imprisoned. Former Prime Minister Mrs Indira Gandhi or other important politicians or some influential people had one mukhi rudraksha it automatically comes on to the top if immersed in a bag containing rice overnight. If it is kept below Bel Patra leaves overnight, it comes on the top of the leaves. it has miraculous powers and makes the owner rich and famous. it is the cause of fame and prosperity for several film stars and business tycoons. 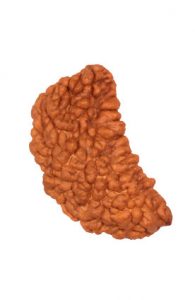 A genuine one mukhi rudraksha from Indonesia can be obtained if one has the right source. It is a small bead (max. 12 mm long and upto 6 mm in central width) having an oblong shape. It resembles the two mukhi of Indonesia but the exception is that the one line is complete on one side and on the other side it partially exists as the closing loop of the bead. In two mukhi rudraksha, both the lines clearly exist.

Indonesian beads of all mukhs have been disected and noticed that the number of inner clefts equal the number of mukhs outside. One mukhi rudraksha has one cleft inside, while a two mukhi rudraksha has two clefts and so on. In the case of Chandrakar one mukhi, it has one wide opening (not a hole). Such is the case with two or three mukhi Chandrakar too. Even Haridwar two, three and four mukhi rudrakshas have only one opening inside (Fig. 10). This is a valid test to verify the mukhs in a rudraksha and it is fully relevant for Nepal or Indonesian beads, which also follow other characteristics as given in our ancient epics.

Indonesian one mukhi rudraksha, if available, is the best choice as on date for those aspiring to get one mukhi genuine rudraksha.